About 4 hours from Kununurra, just over the NT/WA border,  is Purnululu National Park, in which sits the famous Bungle Bungle Range, or Bungle Bungles. The highway through the Kimberley Region is very good and picturesque, so the time passes easily. We stopped at Turkey Creek Roadhouse for a stretch and that had food and accommodation for those needing it.

The 1km road into Bungle Bungle Caravan Park was pretty corrugated and we set up on the large, unshaded block before quickly asking about the condition of the road into the National Park. We were pretty inexperienced 4×4 drivers and wanted to decide if we should be doing the $380pp tour instead. Encouragement and approval of our vehicle was not lacking and we made nervous plans for the following day, while the desert sunset brought an unexpected chill.

What an adventure! If you’re an avid off-roader you’d have given it an 8, I think, as those who’d just come off the Gibb River Road said it compared to that journey’s detour tracks. What are we talking about? 1.5 hours (53km) of heavily corrugated road on entry and exit, for which we lowered the psi to 25, and five river crossings not requiring a snorkel, but we weren’t stopping. Other corrugated sections of varying degree, making it a rattling good trip.

We followed the tour plan and, after calling in at the visitor centre to record our names and our pass, went south first, to Piccaninny Creek carpark to see the Domes and Cathedral Gorge. The former is what has made the Bungles famous in the late 1980s, when a film crew flew over it and  ‘discovered’ the beehive-shaped sandstone hills. Capturing the expanse of the range is very difficult with a standard lens, as you can see in the header photo.

The average height of the domes is 250m and the distinctive orange and black towers are fragile. As the sign on the walk says, “… each encased in a thin, protective skin of orange bands of iron oxide and grey to black bands of cyanobacteria. A skin is deposited on the surface by water seeping through the sandstone. If the banded skin is damaged the sandstone is rapidly eroded away.” Another sign informs us that the foundations were laid down 360 million years ago and flood waters have brought deposits and formed deep gorges.

From the carpark, both walks are very easy, on flat paths, well-signed. You’ll be unprotected from the sun in many places, so remember hat, sunscreen and water. After you reach the pool in the Domes, the path to Cathedral Rock, back and to the left, is along some sections of dry river bed, so use good walking footwear for sandy and uneven surfaces.

There are ladders to help negotiate difficult terrain.

Cathedral Gorge is unexpectedly stunning, but you have to get in and under the Ridge to fully appreciate it. Many people just sit for a time, absorbing the extraordinary peace and beauty. You first encounter the amphitheatre and the still pool in the centre.

We ate our lunch in the shade, here, then headed for the northern end of the National Park and Echidna Chasm.

From the carpark, you follow the dry creek bed, over mostly rocky terrain, through palms bordered by the orange sandstone cliffs, showing signs of erosion.

The river bed and walls are made up of conglomerate, formed by pebbles and boulders that have been embedded over millions of years.

It isn’t too long before the path narrows and you read about large, falling boulders, causing a little increase in your pace.

The light and the decreasing width of the path is beautiful and highlights this impressive weakness in the Bungle Bungle Ranges.

When you get to the end, it’s quite obvious there is no going forward, so back you go, still able to admire the glowing cliffs.

Near the start of the riverbed is a sign directing you to the Northern Escarpment Walk which is a very short (5min) trip to look over the landscape. In the distance are ranges that are billions of years old and information boards explain the changes in the environment and the practices of the Aboriginal people of the area. There is a move back to involving the original inhabitants in the preservation of the area, as their knowledge of watercourses, in particular, is crucial to the health of the region.

It isn’t a trip for the feint hearted and is one to put on your bucket list, but only if you can be rattled around a bit. You need to time it, as the park is closed between November and April, roughly, but we were here in October one year and the high temperatures meant it was closed. So, do a little research.

Travel safe. Take your hat, water and sunscreen, and maybe a spare tyre. 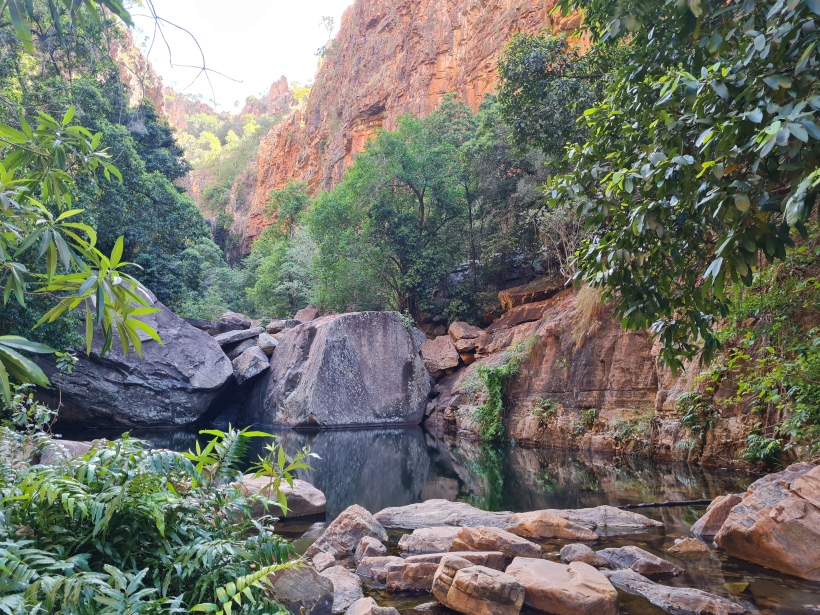 On the notorious Gibb River Road, near the Kununurra end, is a place called El Questro. It is a resort and was once only accessible by a rough dirt track, that is now a bitumen road. However, places that lead off from here are via dirt roads, that may be corrugated if the grader hasn’t been through. Emma Gorge is one such place and it is a jewel worth risking the bumpy 2km track.

Once at the carpark, there is a magnificent information bay, with restaurant, accommodation, toilets and permits to visit the park. We had bought a park pass, that gives us access to WA parks for a month, as we thought it could be more convenient than having correct change, getting permits printed, etc., so we went directly to the start.

This was a mixture of terrain, with rocky bits, smooth path, climbing sections and a couple of creek crossings, where the water as very low. Birds and butterflies flit across your path and the sound of gurgling water comes from somewhere near, either seen as a brook, or hidden by reeds.

It is such a beautiful sight that greets you after about 40 minutes, I don’t know where to begin. The gorge rises ahead of you and up maybe 100m. The walls are orange and laced with ferns or marked with patterns of erosion.

Water cascades down from a point on the left and bounces off rock ledges to splash into the centre pool of water. The pool is maybe 40m in diameter and on the right a rock ledge hangs over the water, dripping onto those who venture there, and the water there is warm, as I think it is thermal.

The edges to the pool are sandy and you can see the bottom, which becomes rocky and pebbly. Towards the centre it is very dark and you cannot make out what is down there. The temperature is pretty cool, but not quite cold. As you float towards the rock lip, looking up, you see an oval of blue sky, lined with a garland of ferns and rocks. It is so tranquil and beautiful.

This is a long way from anywhere, any time. It is ancient and unspoilt and majestic, like everything in the Kimberley. See it, breathe it, feel it and carry some of its magic away with you.

But take water, hat and sunscreen so that you live to tell the tale. 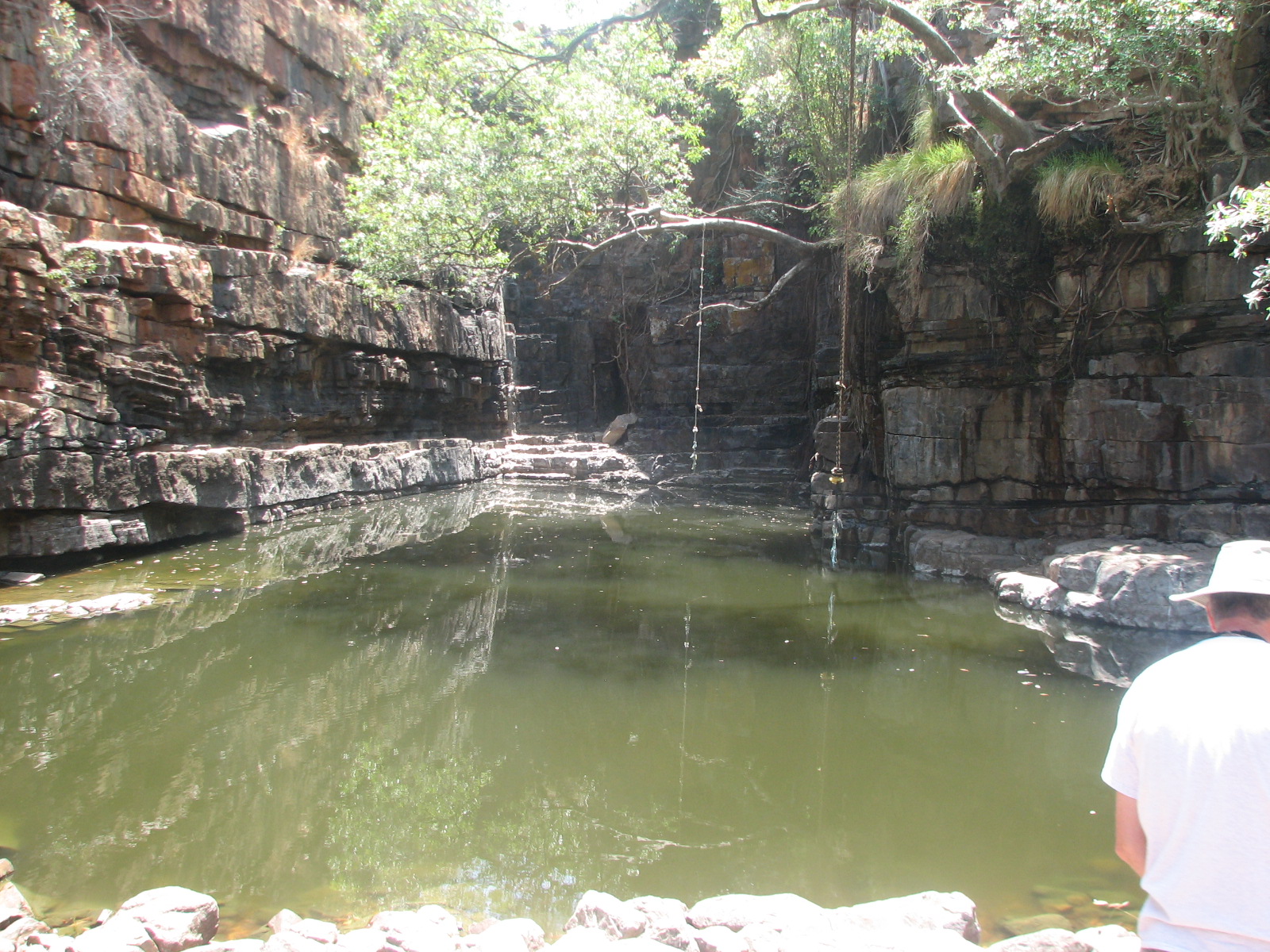 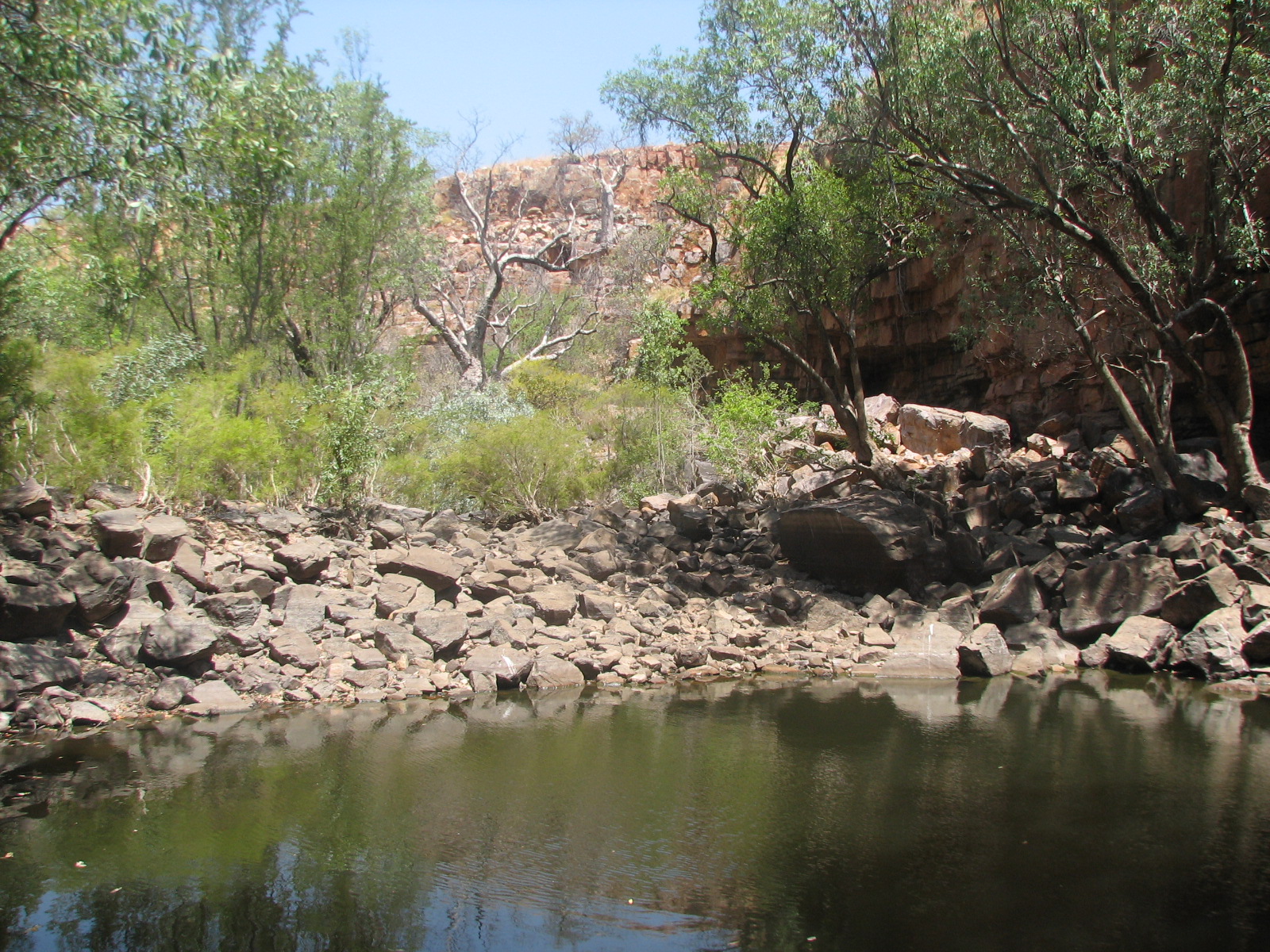 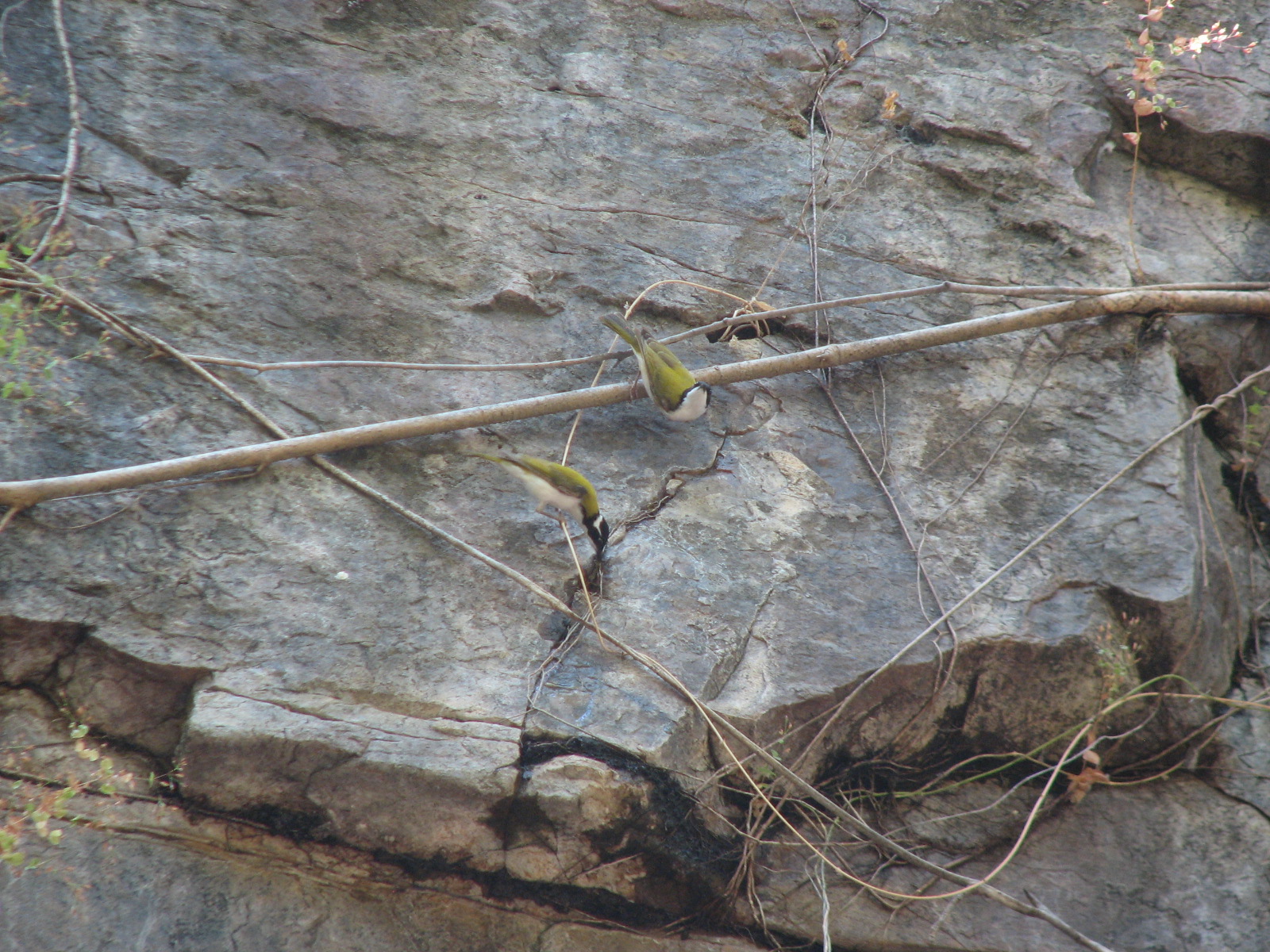 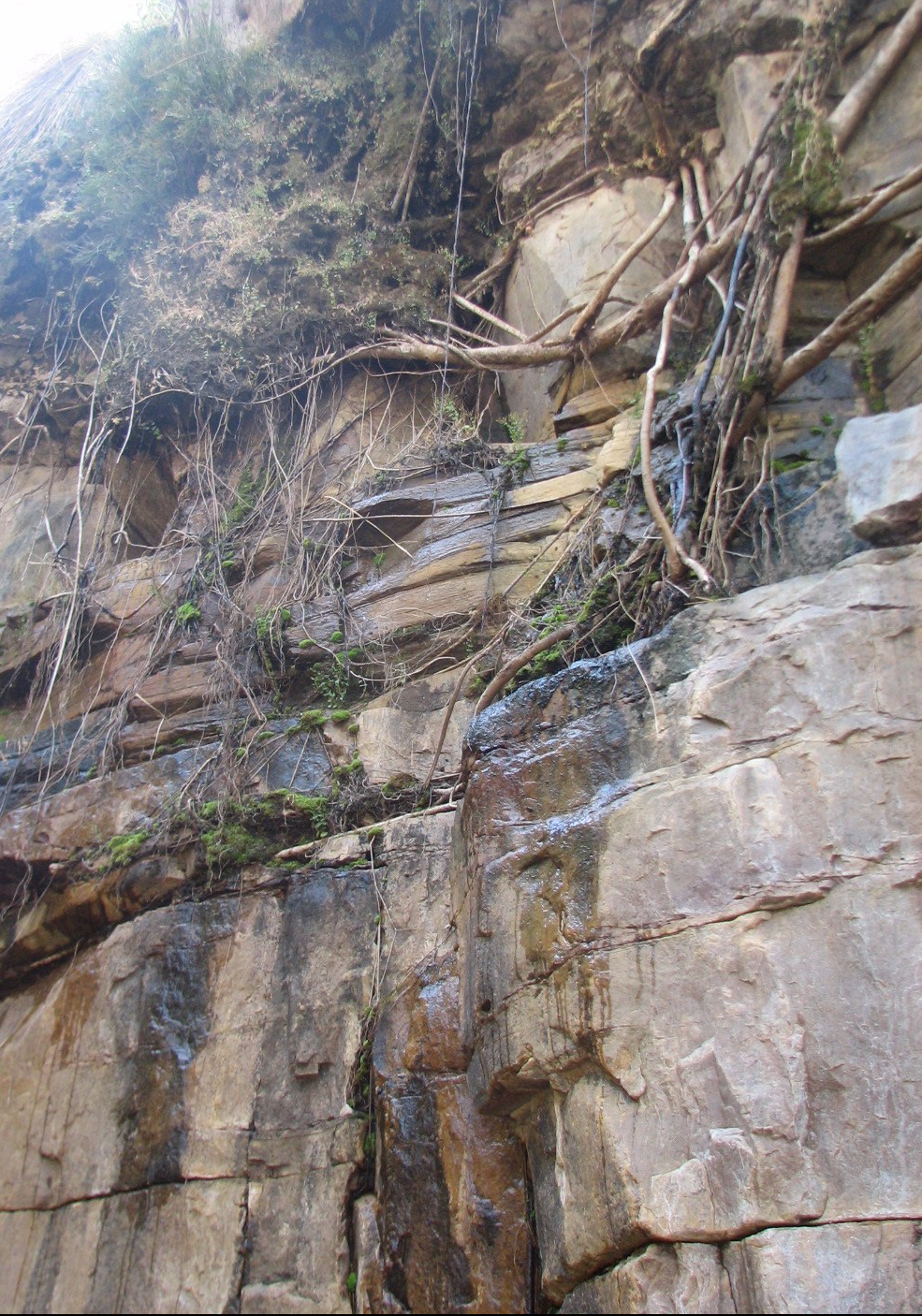