Our exit from Leigh Creek brought us to a beautiful spot just out of town, that we’d missed on our way in. We’d heard of Aroona Dam and thought it would be in the middle of town, so might have completely passed this gem by.

The road in is dirt, but would be ok if you were towing. I think it might be 5km and it was scenic. We were not expecting the size of the dam or the range of things to do and wildlife.

There’s an old concrete BBQ setting but I didn’t take a close look to see if it still worked. I’d definitely recommend taking food and spending some time here, as you could fill hours, easily. Don’t forget hat, sunscreen and some portable shade could be good.

We left and decided to make a stop at Beltana, as we had heard a tourist operator talking up the town, as having been rebuilt from ruin and the model upon which Furina was based. It wasn’t far from Leigh Creek, but the road from the highway was pretty rough at the meeting of waterways and if we had been towing it would have made for plenty of careful crossings. No water in sight, of course.

Beltana is occupied and we expected a shop or some signs of life, but there were none, so we ate our lunch, used the excellent facilities and drove on to Parachilna.

What, you might ask, does the ediacara capital of the world, mean? Quoting from https://www.environment.gov.au/heritage/places/national/ediacara

” In 1946, geologist Reginald Sprigg discovered fossil imprints in rocks in the Flinders Ranges at the old Ediacara minefield. This discovery was the first time the fossilised remains of an entire community of soft-bodied creatures had been found in such abundance anywhere in the world. ”

The Ediacaran period is 94 million years between Cryogenian and Cambrian Periods.

There is an area just after Parachilna, heading north, called Nilpena, where it is very easy to pick up Ediacaran fossils. Had we known…

There is a great hotel at which to stop here and plenty of information.

From here, it’s still about 5 hours to Adelaide, so pace yourself and plan ahead where you’ll stop and for how long. We made several stops before home, including Orroroo and Auburn.

I think it’s my first or second attempt at Friday follies, which is about crazy signs. It’s hosted by Proscenium.

This one is from Beltana in the Northern Flinders Ranges, where they have rebuilt from the ruins of an early township.

We’ve headed to the Flinders Ranges and beyond for Sonofabeach’s challenge this week.

Located from 200km to 800km north of Adelaide, the largest mountain range in South Australia is discontinuous and includes the Southern, Central and Northern Ranges. Over 500 million years old, the geology is diverse and dramatic and each town or city along the way offers something different. I’ll share with you the path we took, after doing some research.

Day 1: Pt Wakefield Road to Quorn. We stopped for a break and an excellent coffee at the Flinders Rest pub in Warnertown, then non-stop to Quorn. After checking in at the Quorn caravan park, we drove out on the Arden Vale Road (dirt, but good) to the Simmonston Ruins, where eager pioneers had built, anticipating the railway’s course, which altered.

There are several sights along this track, including Proby’s grave, the sad tale of a wealthy 24 year-old Hugh Proby, who drowned in a freak flood (the same flood that had pioneers think that there’d be plenty of water in the area).

Everywhere is a good spot to get some view of the Ranges, but Buckaringa Scenic Drive and lookout was reasonable, despite the falling light.

We headed to Warren Gorge expecting somewhere to hike, but found instead a popular place to camp on the cheap. You could certainly do hikes if you stayed here, but it wasn’t the gorge walk we were expecting. Fabulous examples of rock formations and flora typical to the area.

lines of rock on a hillside

On our way back, we checked out the road to Dutchman’s Stern Conservation Park for the next day.

Day 2: Dutchman’s Stern is a great hiking spot, but the road out isn’t suitable for a caravan. Most of it was fine for a regular car, but there were some deep corrugations.

We decided to do the Terrace Viewpoint and see how we went for time, but then continued on to the summit. As time was short we returned by the same route, rather than doing the loop hike. The paths vary, but are not suitable for wheelchairs and there’s often loose rock. We made it in 2 hours and are of average health and fitness for over 55s. No terribly steep bits, just the occasional rubble.

The views, on this early, foggy morning were inspiring, even before we got to the Terrace Viewpoint.

Making it to the summit about 10 minutes later.

and walk back with wildlife.

Accommodation is available at the homestead and shearer’s quarters, for a reasonable group, if you decide to base yourself here and look around the area or do more walks. We went from here to Death Rock. I couldn’t find why it was called that, but the local Aboriginal people call the area Kanyaka, meaning piece of rock, and it was significant to them because it was, and remains, a permanent waterhole.

Hugh Proby (mentioned earlier) moved to the area and set up a cattle station that became one of the largest in the area until drought forced its closure. The ruins are substantial and hint at more prosperous times. They are very picturesque.

It is an easy drive from here to Hawker and then on to Wilpena Pound, where we camped in an unpowered site, beside the river bed. The park is very large and there is a swimming pool, but I’m not sure if it’s for motel guests. The rest of the park allowed open fires, which I didn’t expect at this time of the year.

We set out fairly soon for Sacred Canyon, which has some Adnyamathanha engravings. The Aboriginal people do not mind that you take photos of it and the canyon is short, making it manageable for families with young children. If you can make it along the serious corrugations to the canyon, it is pretty, interesting and has some great rock formations.

We continued on a short way to Huck’s lookout and Stoke’s Hill lookout, the latter having a short but shocking dirt road. The views were ok, but late light on a cloudy day isn’t the nest for photos (sorry).

We passed some emus on the way back to the campsite. They were everywhere and you need to keep an eye out for them, as they can dash across the road and into your path.

Day 3: We took Explorer’s Highway, beside paddy melons, to the Great Wall of China

and then on to Blinman, the highest recorded town in South Australia. It has an art gallery, great bakery/coffee shop, pub and excellent public toilets.

From here we headed to Glass and Parachilna Gorges. It was a long stretch that had no water, like most of the Ranges, and you couldn’t help but wonder how beautiful it would be with some rain. Apparently, it had been 18 months since they had had a decent rainfall and the effect was shocking. Gorges that I had been to in years past, with thundering rivers, were dry dust bowls. Campers took advantage of the dry beds and pitched in isolated spots.

Driving towards Brachina Gorge, on good road and with the Ranges to your left, was lovely. Brachina Lookout is interesting, with its geological information repeated as you travel through the gorge, as if through time. But, again, the dry river beds we lunched beside were disappointing. Plenty of campsites here, if you are self-sufficient or only need a toilet.

Returning to Wilpena, I took the walk at the back of the park, to the old Wilpena Station. This is a beautiful path and easy on foot or in a wheelchair, or you can get a lift at the tourist centre, I think, most of the way.

The lookouts were not remarkable and I think the view from the hill at the back of the park is much better and you get plenty of roos.

Day 4: We set off at 8.45 am for St Mary’s Peak, the highest mountain in the range, without intending to climb beyond the shoulder, as the Adnyamathanha people hold the peak as a significant site.

We checked at the tour centre first, as the maps provided weren’t clear, as in which direction to head. There is an easier, level track that is longer but pretty flat, with exposed sections, and an outer track that is fast, steep and difficult.

After a disagreement regarding which marker to follow, we believed that we were on the easy track, and powered on.

The track was picturesque and enjoyable for about an hour and then we got to some very steep climbs requiring vertical scaling of rock walls. We stopped for a bite (thankfully we had the scroggin) and went on and up. Needless to say, we had taken the difficult way and although it was quite quick, we didn’t joyfully anticipate the drops on return.

Taking the longer route back (12 km) took a lot longer than it should have. A mistake in judgement had us travelling with one bottle of water and no sunscreen. The way was flat but very exposed and by now it was midday. The whole trek took us 7 hours, instead of the suggested 6, or less. BIG MISTAKE – please don’t make it.

We stopped at the Hill’s Homestead, built in 1888, and read about Jessie Hill, daughter of the owner. We meandered along the shady path back to camp for a huge rest and an average beer on our return, only venturing to the office to seek WiFi.

Day 5: We went home via Cradock, stopping at Maggie’s Rendezvous in Orroroo for homemade quandong pie (don’t miss it) and to admire their pink ribbon support. Maggies had some quirky table puzzles and nic nacks that kept you distracted while you waited (not that it was a long time). We had lived in Orroroo a short time while doing teacher placement and it is a lovely town, very friendly.

Last stop historic Clare for a bakery vegetarian pasty and then home.

Safe travels. Take plenty of water, a hat and sunscreen. It’s not pleasant if you forget!!

In response to Terri’s Sunday Stills challenge, ‘texture’ I have these textures from the Flinders Ranges:

Native to Central Flinders Ranges, my flower of the day is called vildalda by the Adnyamathanha people.

For this week’s which way challenge, some trails, signs and a dry river bed in South Australia’s Flinders Ranges. 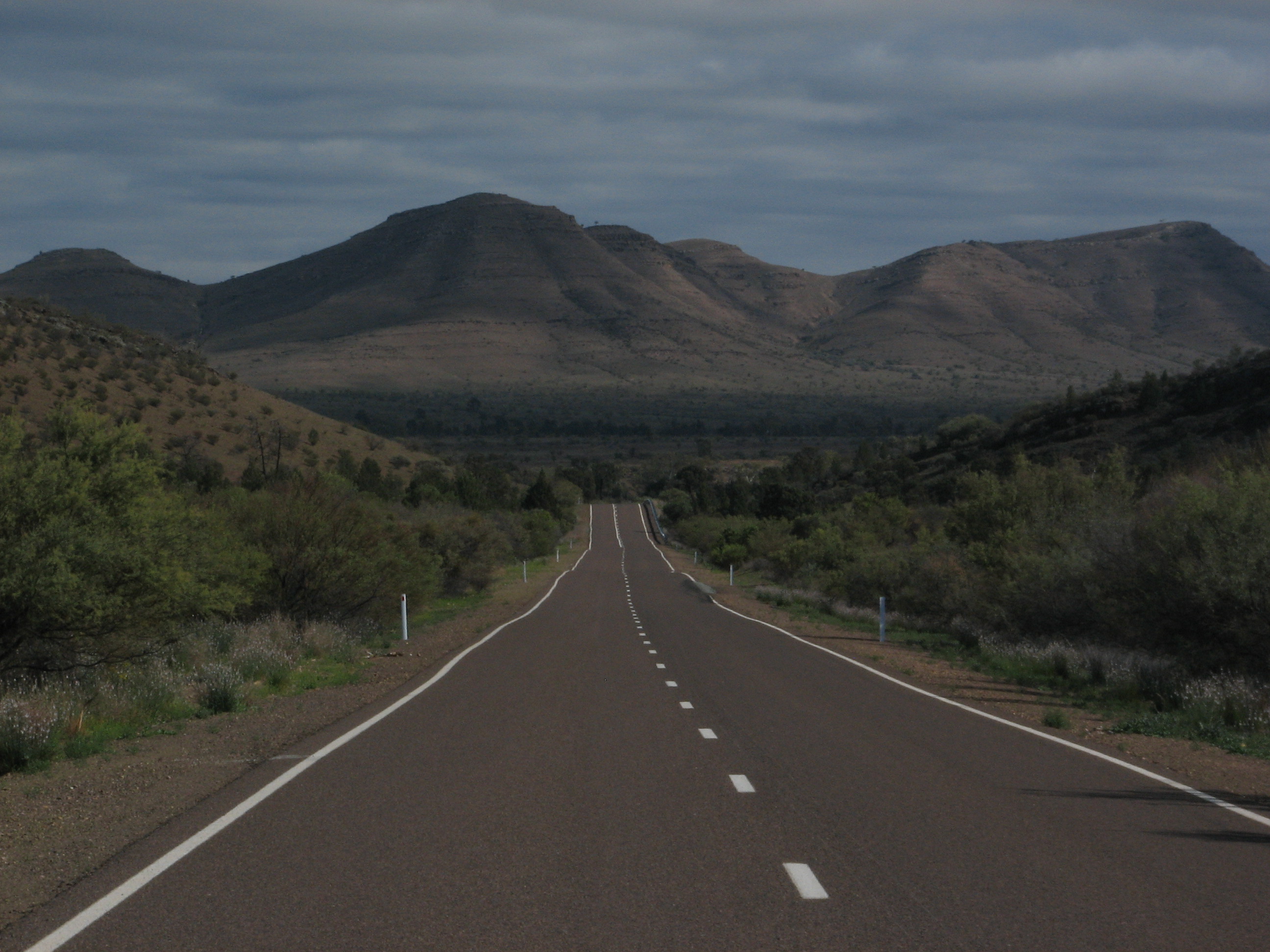 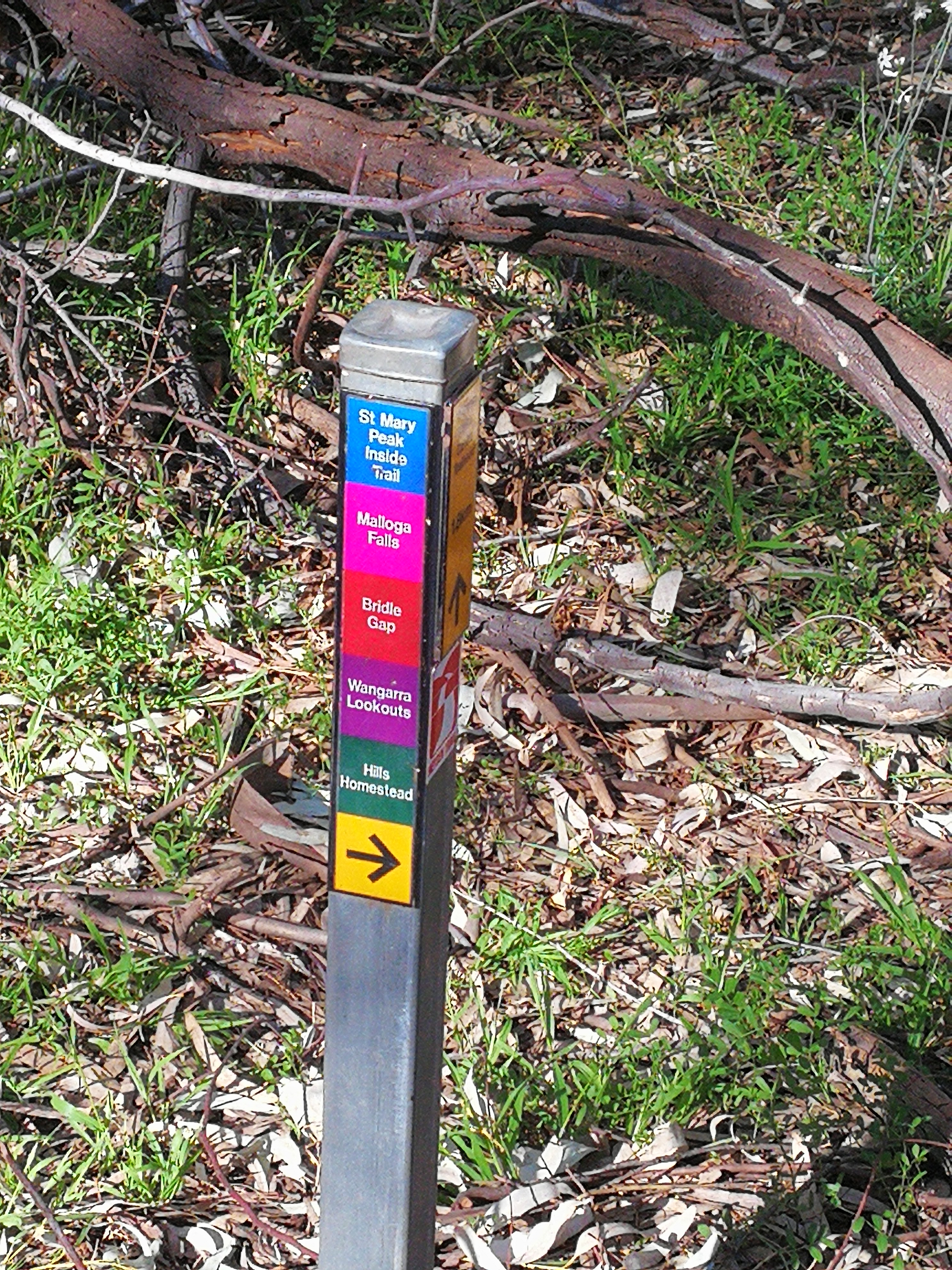 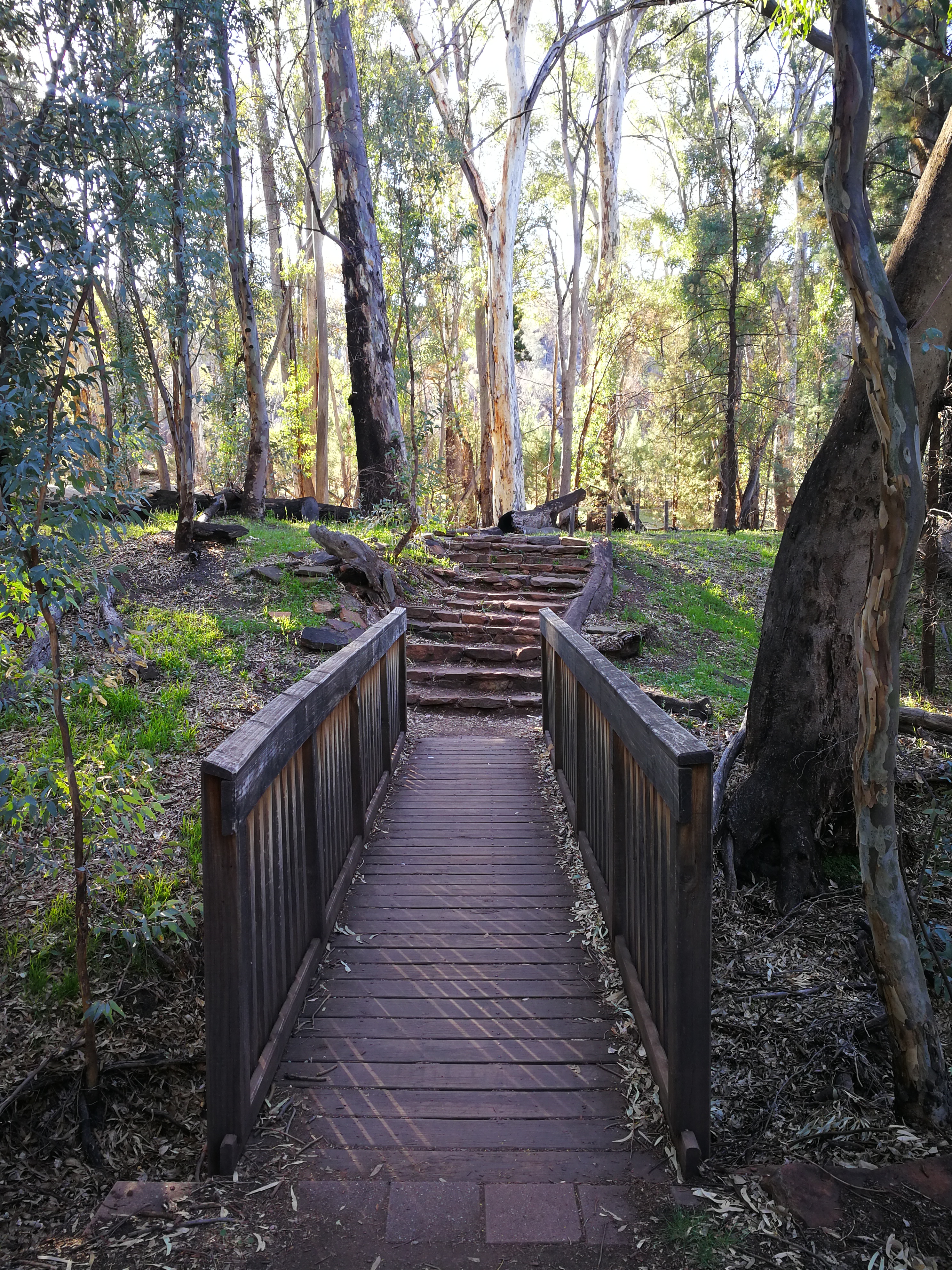 For Cee’s flower of the day.