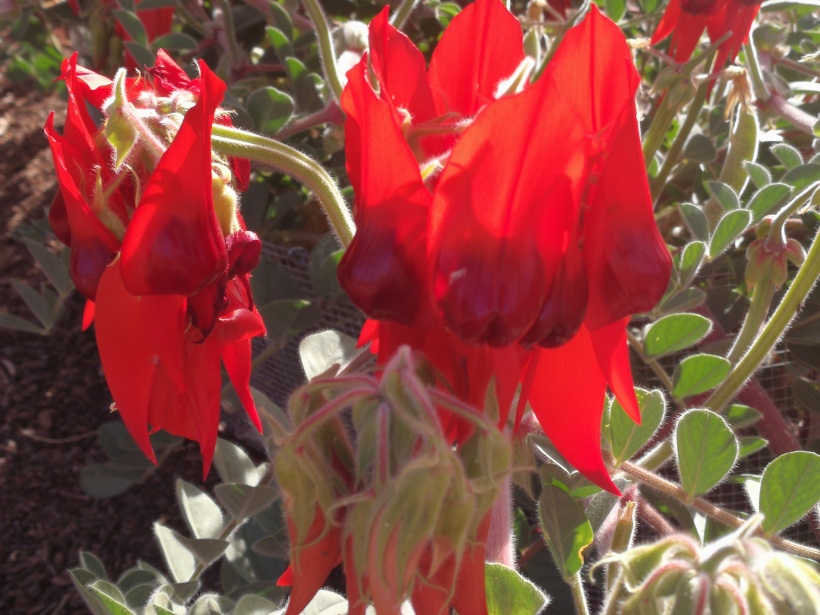 For Jude’s Life In Colour challenge, our State emblem, which also appears prolifically in the desert – Sturt Desert Pea

It was an easy drive from Alice Springs to Yulara, but long, with 2×2.5 hour stretches each.

The section between Erldunda and Yulara have long scenic views, with red sand dunes and different coloured spinifex. The desert oak, resembling sheoak, are in two forms , either bushy or thin and I learned in later days that this was either mature or juvenile. They sway gently in the breeze, no matter their age, and add that touch of green to the soft colours already there.

We passed Mt Ebenezer and saw that the rest area was dilapidated and both felt sad that it had come to disrepair. We also passed a couple of viable rest stops, but couldn’t think of a situation where we’d need to stop overnight at that distance.

The campsite was busy, but only every second site was occupied. Yulara is an area but made up of the huge complex that is Ayres Rock Resort, and you can get luxurious accommodation as well as camping sites. We bought tickets for the Field of Lights at $44/ea and had to catch the shuttle at 7.15 outside the campground. Although we both felt a little tired, we were glad we did this in the end, as the luxurious coach trip and very beautiful light show was soothing.

Apparently the artist set these up with about 20 helpers over a few months and, in 2016, intended them to be there for a few months. They are now intended to remain until 2027. The area is the same as 7 football ovals and you just get a sea of lights, in various colours that change, sweeping before you.

We walked along paths that were obviously lit, but not very bright, and was possible to see little coloured lights as far as the eye could make out. It was hard to photograph, which was a shame as I wanted to share the experience with my family and friends.

The next day I caught the shuttle and attended a talk on native plants and their uses, given by an Aboriginal woman, which was fabulous. I learned about the dessert oak and that the young keep their foliage close to the trunk to make sure the rain drips close to the trunk. She said that some of the older ones in the national park would be thousands of years old.

Native lemon grass is one of the only plants that the Anangu (anarnoo) ingest, as most plants are used for creams to cure rashes and bites. It looks pretty ordinary but if you bruise the green stems it smells of lemon and this is boiled to make a soothing tea for the throat.

Cassia plant and seeds. The little yellow flowers are pretty common and the seeds are collected when dry and ground to make a flour. This is used to make a crisp biscuit, full of protein. The cassia is often host to other plants and the one we looked at had 4 different types of mistletoe growing from it.

The seeds of the mulga berry are sticky and when birds eat it, they can’t easily poo it out, so have to wipe their bottoms on trees. The seed then sticks to the tree and grows from it. The berry, itself, is eaten by hunters when they get hungry, to suppress hunger, enabling them to go for longer.

The mulga, or witchety tree is a very hard wood and can be identified by the gourds that are laid on it by insects and disease. If you dig around the roots, you should find witchety grubs, which are full of protein and can be eaten raw or cooked. Apparently, they taste like scrambled eggs. The women look for a tree with cracks near the base, indicating that the grub has taken goodness from the roots, causing the roots to swell and the earth to crack.

The spinifex has complex roots that keep the sand dunes in pace, some for 35000 years. If the outer ‘leaves’ are torn off, and mixed with animal poo and water, it makes a very effective glue that sets quickly. Hunters would take some of this with them and if they damaged a weapon, could heat up the glue and repair the tool quickly. It has been shown to work on cars!

The grevillea flower is loaded with honey and the local women would take their bowls of water and dip the flower heads in, give it a shake, and a sweet drink for energy was instantly made. As they didn’t break off the flower, it was there for the next day, until it had finished. You should try it with other grevilleas – I can’t stop myself running my finger along the flowers and tasting.

The native fig has leaves that look like oleander, but the balls of figs set it apart. They start off green and then turn to red and can be eaten. The wasp shares a role in the pollinating, though, and sometimes lays its eggs in it. These figs will be bitter.

There was another talk on cooking with native foods (included tasting) and a film on astronomy, given by another group. So, if you visit when it’s very hot and are not up to one of the walks or sites, there is plenty to do, right at your door.

We visited Uluru once more, walking the 10km around the base, but I’ve shared photos on that before, so I’ll finish with the classic sunrise and sunset shots from the highest point in Yulara and an easy walk. Don’t think you’ll be alone, though.

Visit here, sometime. It will move your spirit.

Wear a hat and sunscreen and ALWAYS take water.

This sunrise surprised me, yesterday, after a lot of overcast mornings. I’m entering it in Hammad’s weekend sky challenge.

It was the first time we had entered Alice from the north and it was pretty, with the MacDonnell Ranges in the background.

We chose our usual caravan park – Big4 MacDonnell Range and were able to use the afternoon to plan an exploration of the East MacDonnells and then relax.

Our first day took us to N’Dhala Gorge which involved magnificent scenery on the way there and some 4WD work from the main road. It was quite a short hike and although pretty, not worth the tough drive out, with lots of corrugations and sand, unless you planned to camp there. The gorge is the site of a large collection of Aboriginal petroglyphs, but as the track has lots of rocky sections I wouldn’t think a wheelchair would get very far.

Heading back towards Alice, the next stop was Trephina Gorge and this was really beautiful.

We also stopped at the ghost gum, a 300+ yr old tree. The walk was moderate/easy with the climbing at the start and sand at the end. It is quite majestic.

It seemed like a short stop to visit Corroboree Rock, so we took the turnoff. It is a startling structure in the middle of other rock formations, so easy to see why it was used as a meeting place.

We headed back to Alice and registered online for the Parrtjima light show, that another traveller had told us about. A shuttle from near the park took us there in the early evening and, surprisingly, we saw a couple we knew from SA on the shuttle.

Parrtjima is the only Aboriginal lightshow of its kind in the world and started in 2016. It is free to enter and the displays are beautiful, but nothing can describe the stunning projection on the West MacDonnell Ranges, accompanied by a narration that explains the relationship between the people and the land. I don’t think my photos will do it justice and we watched it twice, it was so moving.

I’d definitely recommend the event as it is free, spectacular but quite small, so it’s an early night. There are plenty of activities for children to take part in.

The following day, Ellery Creek Big Hole was gorgeous and had a large body of water suitable for swimming if it had been hot enough. We saw a girl going in and her partner was filming her with a drone. The water was icy cold so sooner her than me.

Next we stopped at Serpentine Gorge which had an easy walk in, with a still pool of water at the end and a demanding, steep lookout walk.

The pool of water in the gorge is so cold that it has kept people and animals from going beyond it, for thousands of years. This has meant the ecology is preserved and both life forms can get a cool drink in summer when they need it.

Close to Alice Springs, we stopped at the original Telegraph Station, which is a well-preserved station with indoor and outdoor displays, showing life from as early as 1871. It is one of the first European settlements in Stuart, later named Alice Springs. There are short walks, bike trails and a walk to/from Alice township. We walked to the top of a nearby hill to take photos of the settlement.

We were back in time to watch the sun set over the West MacDonnell Ranges.

Something colourful for the last entry in Becky’s July squares.

A beautiful tree when in flower, at the Mt Lofty Botanic Park where it is not native, for Becky’s squares. I don’t know if it has a ‘common’ name.

The strangler fig is a type of Ficus that grows in tropical rainforests and gets its name from the habit of growing on other trees, often resulting in the demise of the host. They are impressive and beautiful, despite their unfortunate behaviour, and are sometimes very old and massive.

One of the native orchids of Australia.