So, I’ve decided to do a series on Adelaide Waterfalls, for three reasons: Winter is approaching, there are only three of them, and they’re accessible sights of Adelaide.

Morialta Falls, like Waterfall Gully and Horsnell Gully Falls, is 10km from the centre of Adelaide, along good roads.

There are several carparks, allowing you to either walk long the creek to the main base, or to start from the latter. We had my niece with us, who has done two walks here, so we were competently led along the Falls Plateau Walk and returned via the Second Falls Gorge Track. If you were limited for time or had no desire for trecking, the direct path to the falls is very flat and takes about 10 minutes. There are warnings that it can get muddy and slippery. 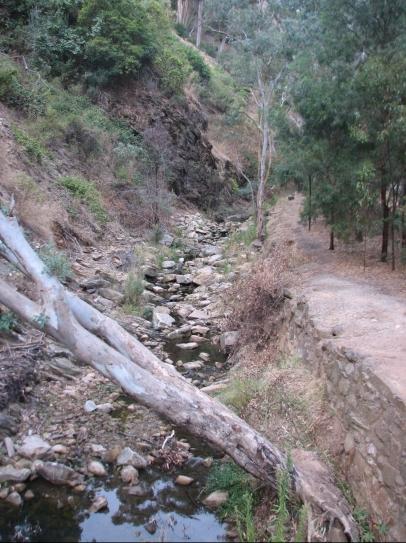 The uphill paths are narrow but in good condition and the start was very steep for about an hour, which was only 2km! There were rest stops where you can also get some nice views. 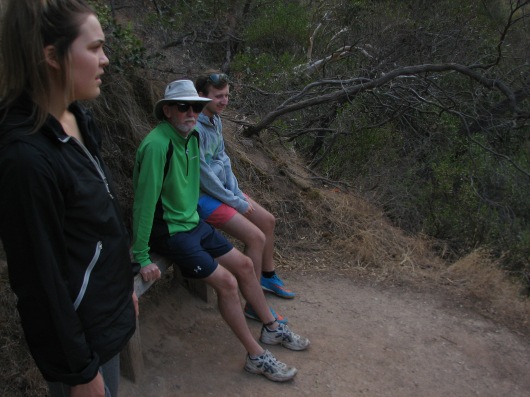 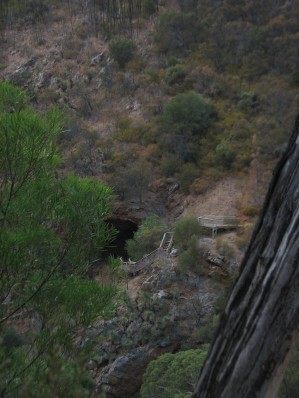 Giant’s Cave off in the distance

Then it’s onward and upward, past xanthorreas, to see what the viewers ahead can see. 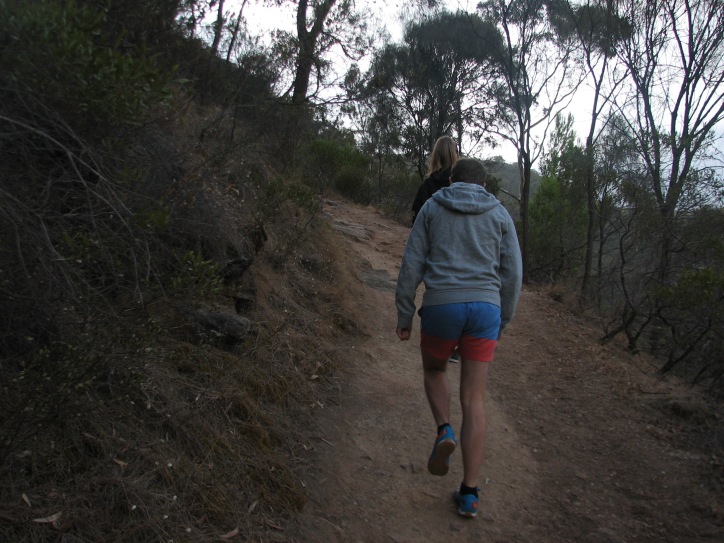 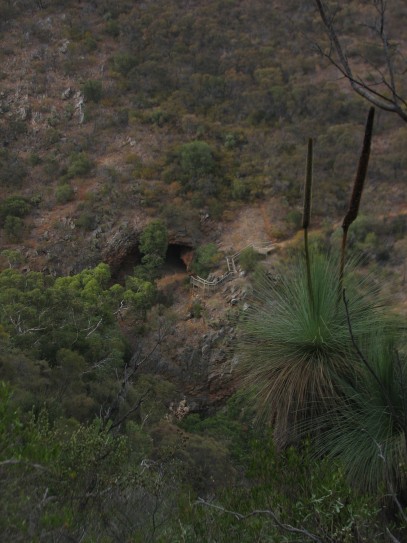 Escarpments, the lower track and the city of Adelaide in the distance. 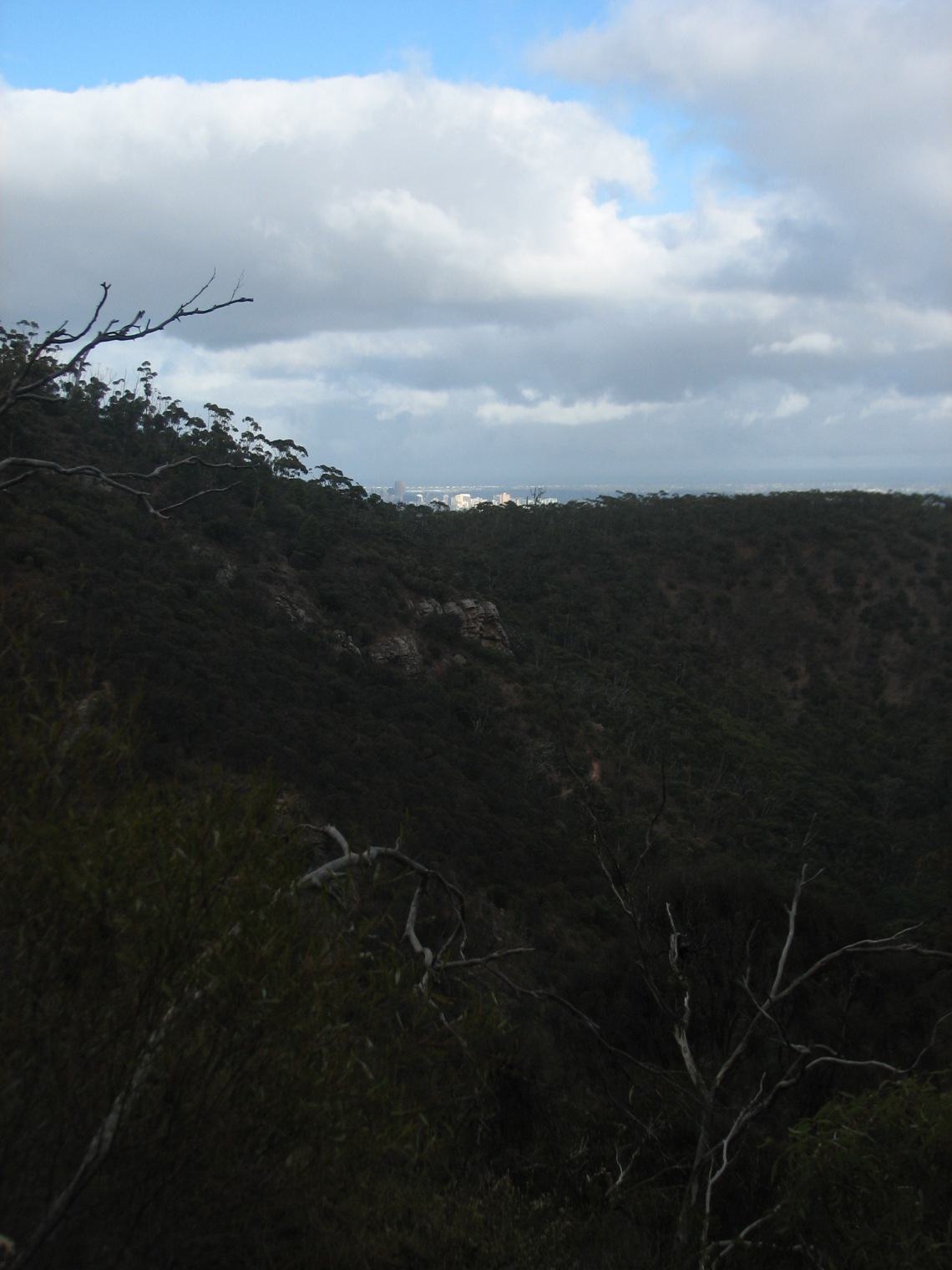 Parakeets dashed into the thicket, hid among ghost gums and xanthorrea.

Until, finally, the rugged cliffs of the first falls appeared below, nestled in a harsh ravine. 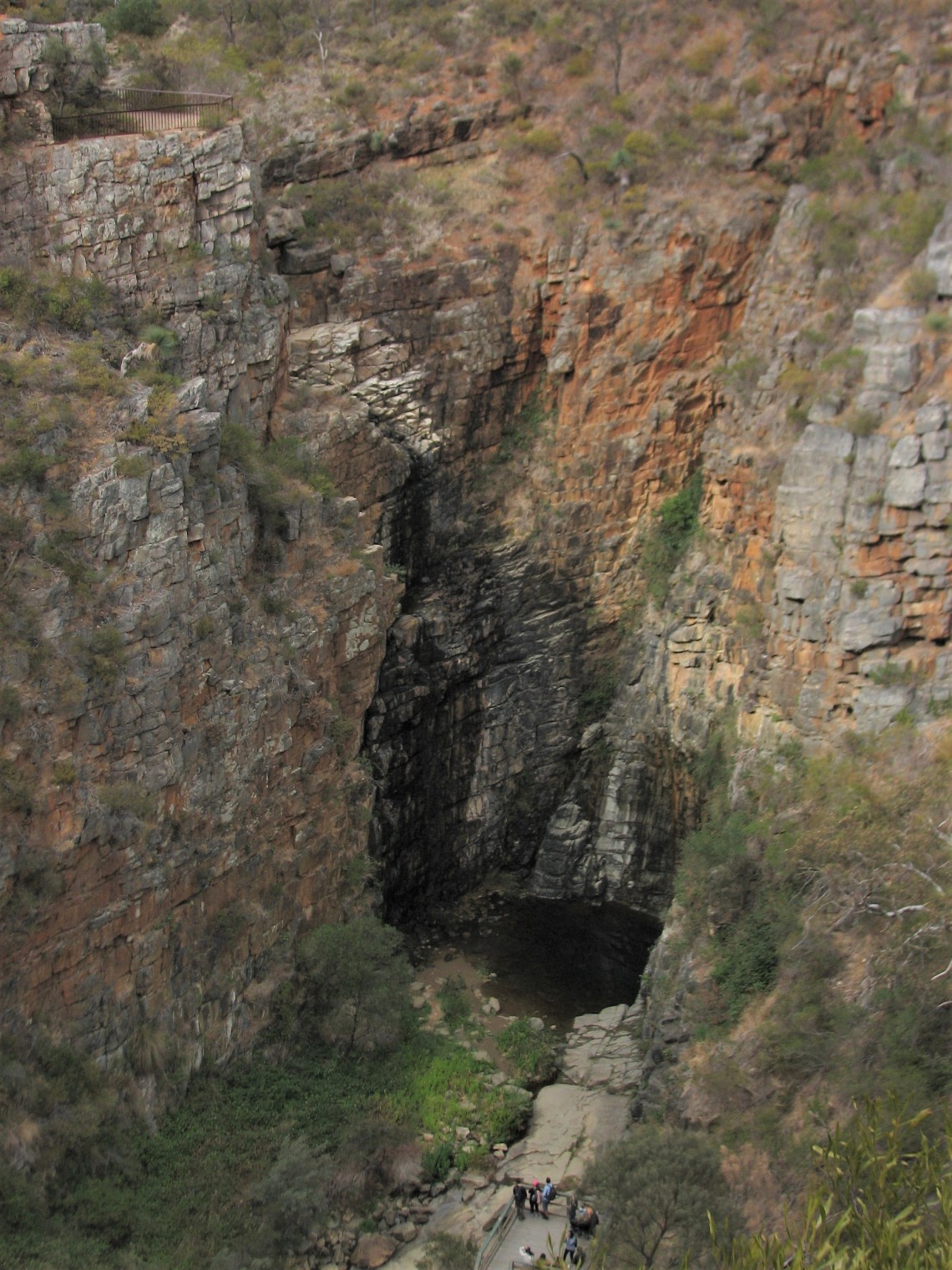 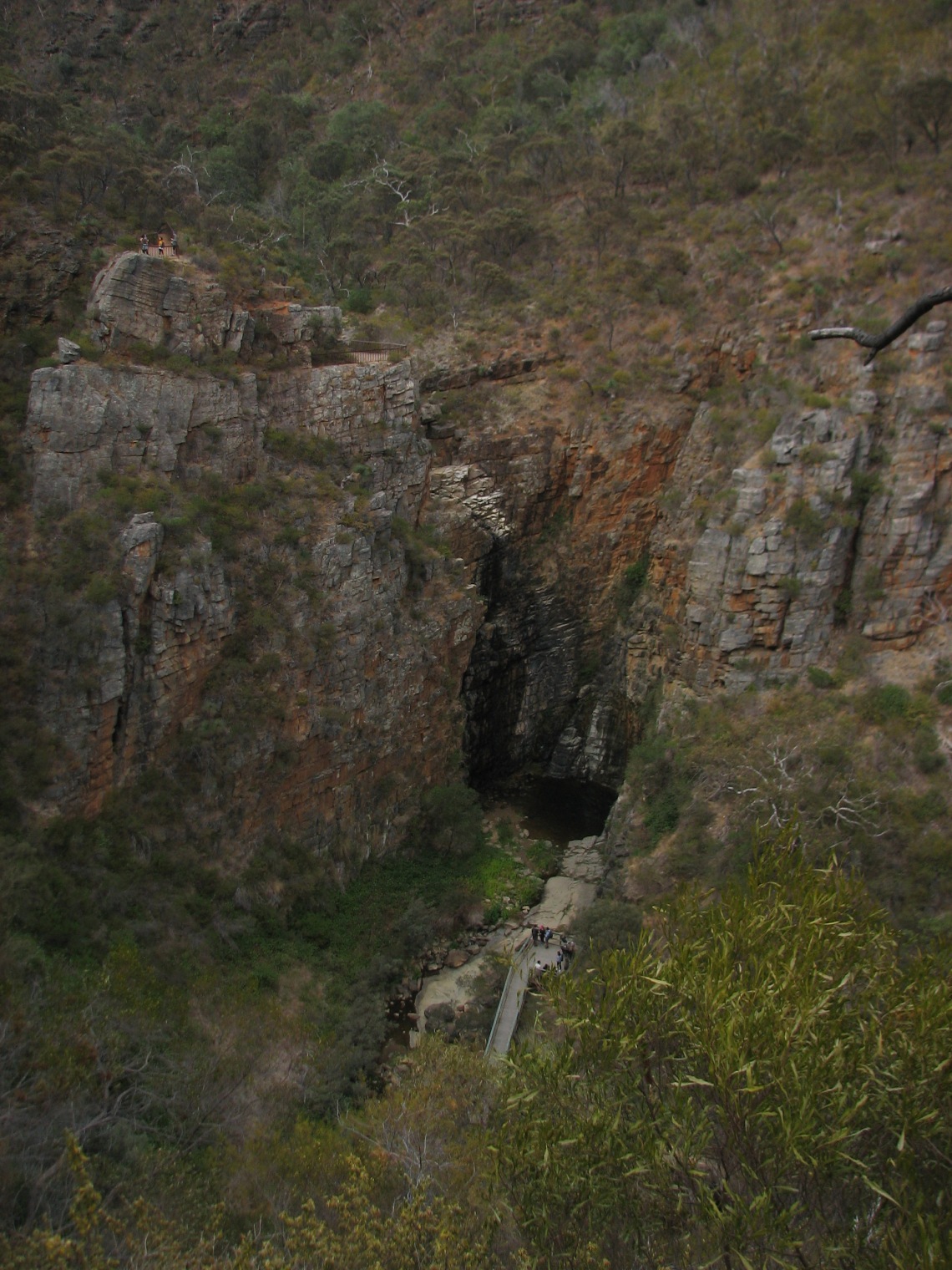 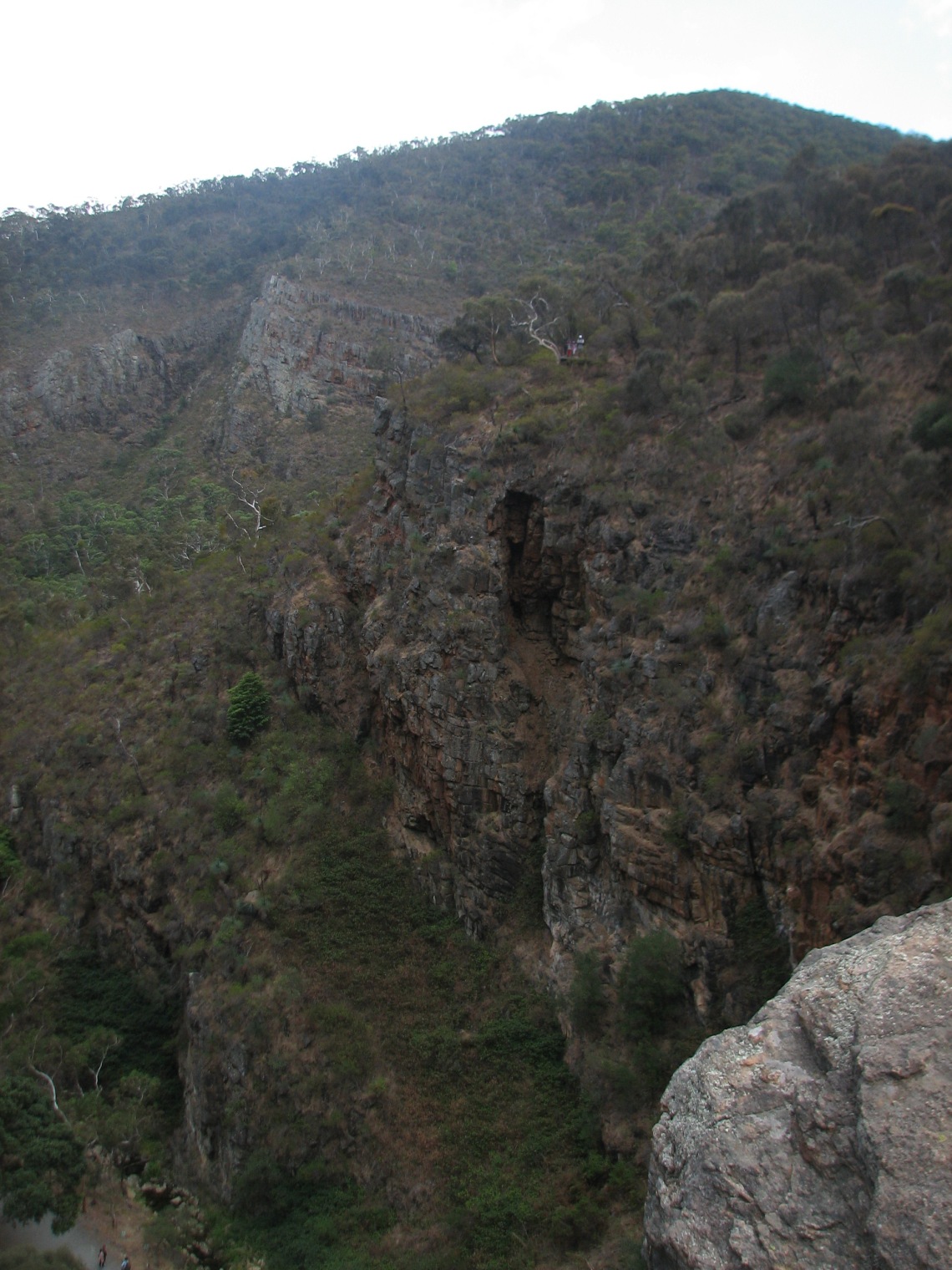 You approach the falls from behind, almost on top of it, and the aspect is beautiful. 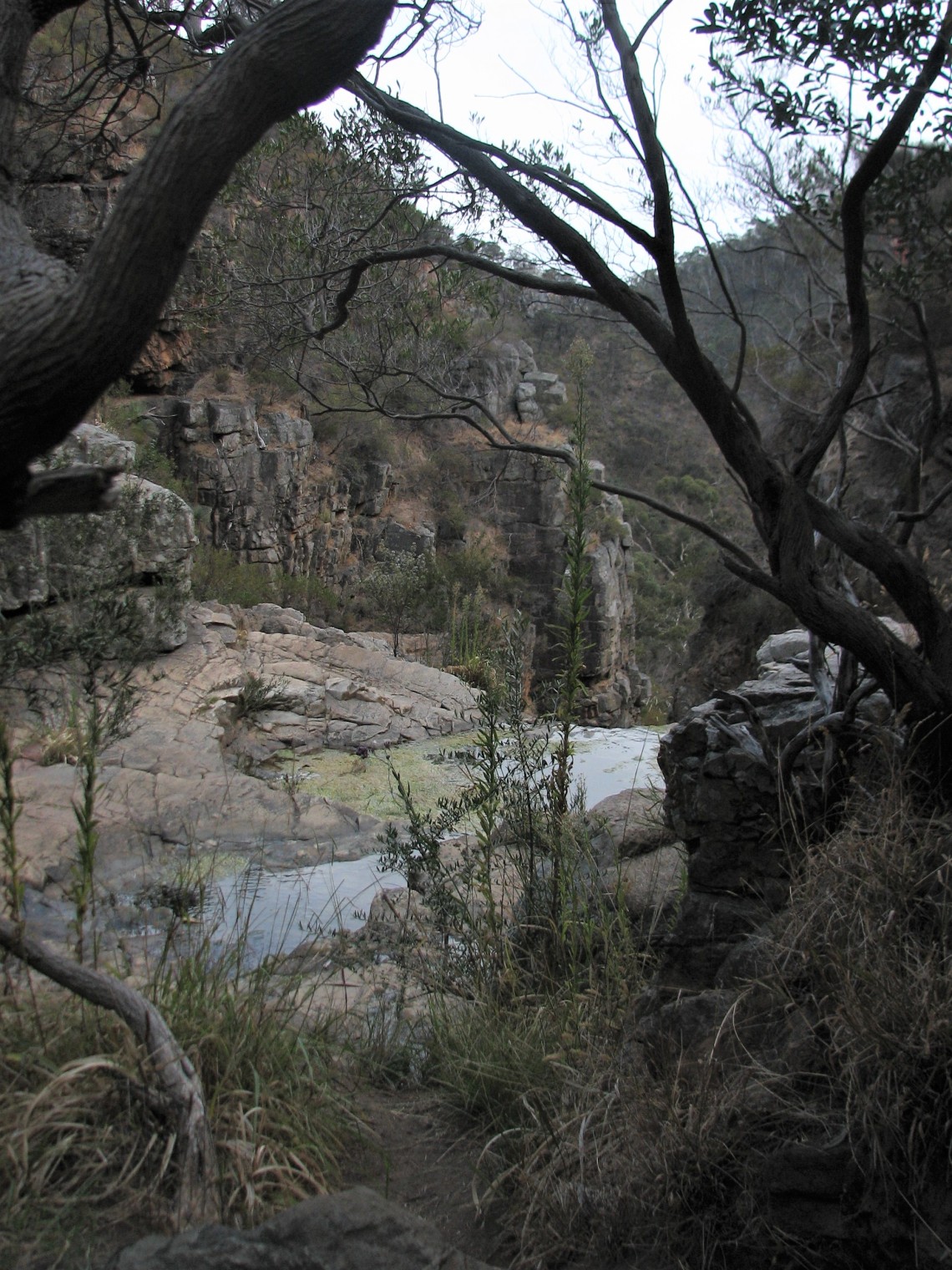 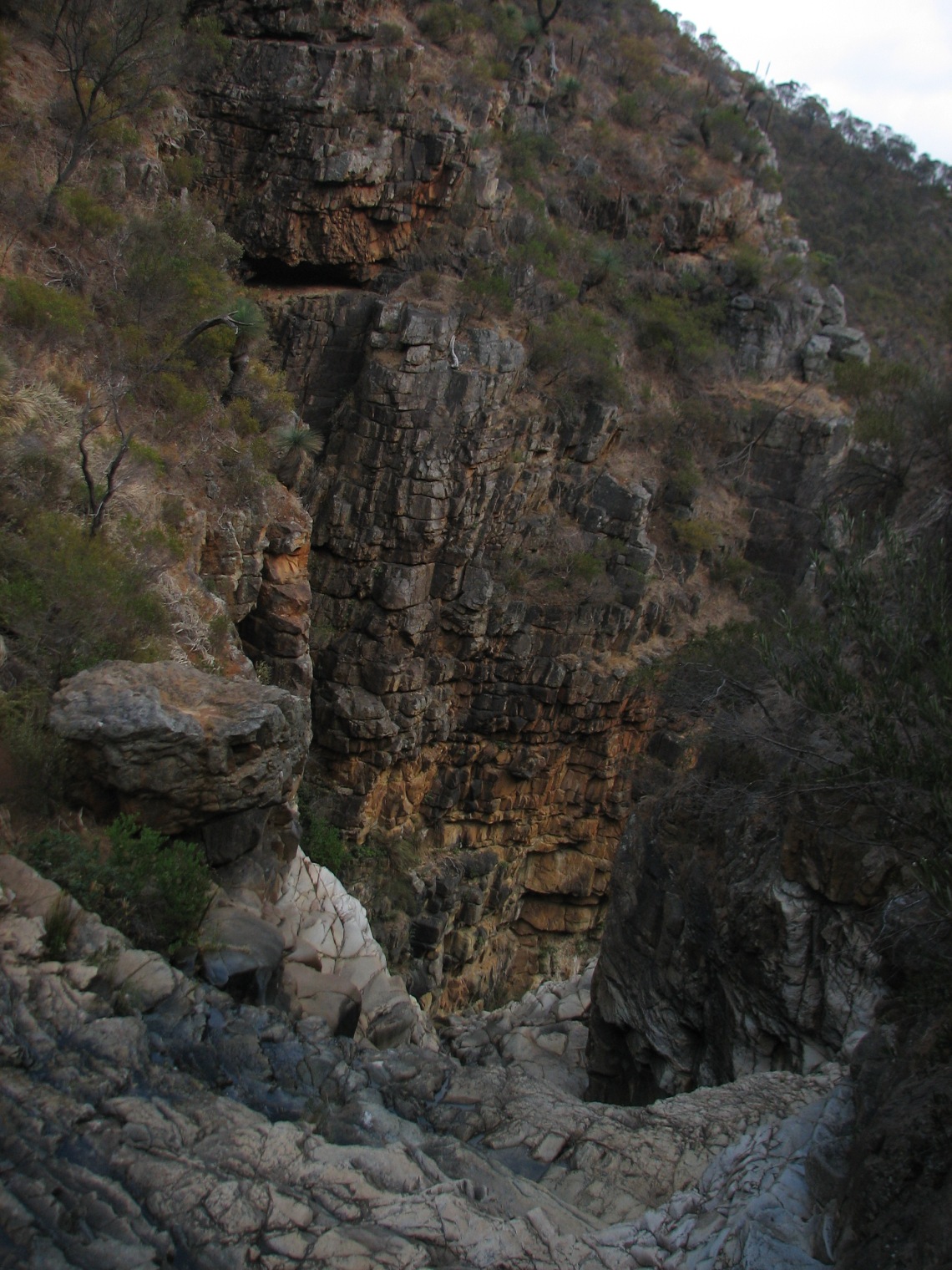 Anticipating greater things, and an easier, more downhill climb, we headed for the second falls, which soon became visible. 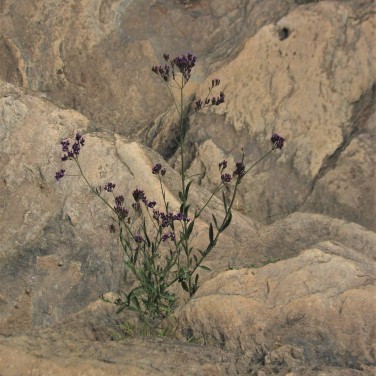 From one of  the many bridges and lookouts, we had great views.  The valley is impressive. 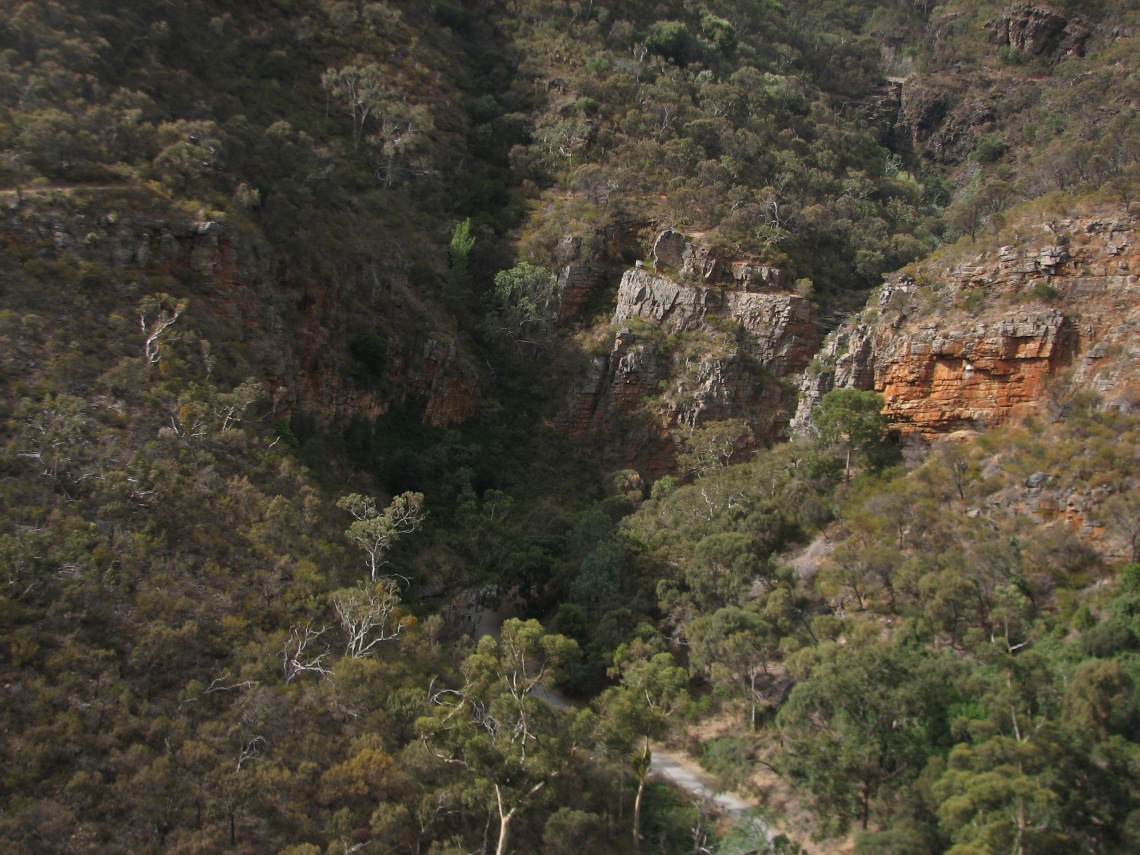 We were keen to see the Giant’s cave and face the first waterfall, so we took advantage of the de-cline, checked our route once more and made for the correct track, admiring the views along the way. 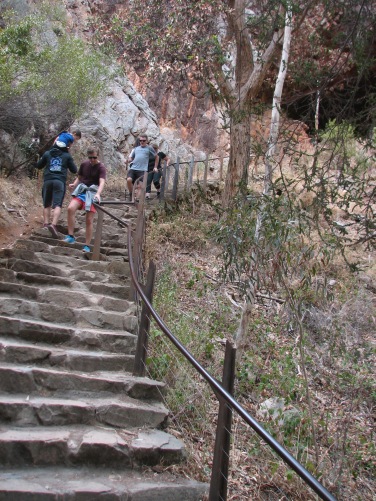 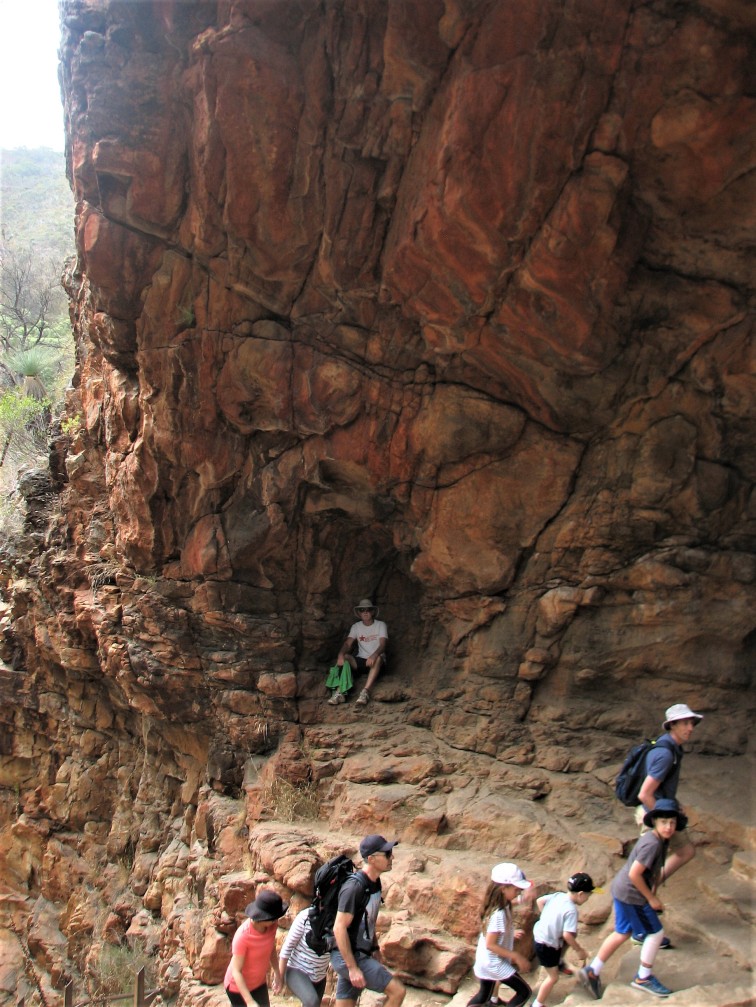 Within a short time we were at the mouth of the Giant’s cave, with its functional stairways and nooks for young and old to enjoy.  Our final destination was before us and the main path, here, is very wide and suitable for wheelchairs, prams, the not-so-ambulant and groups of people. It is a short walk, with steep natural walls and century-old constructed walls. 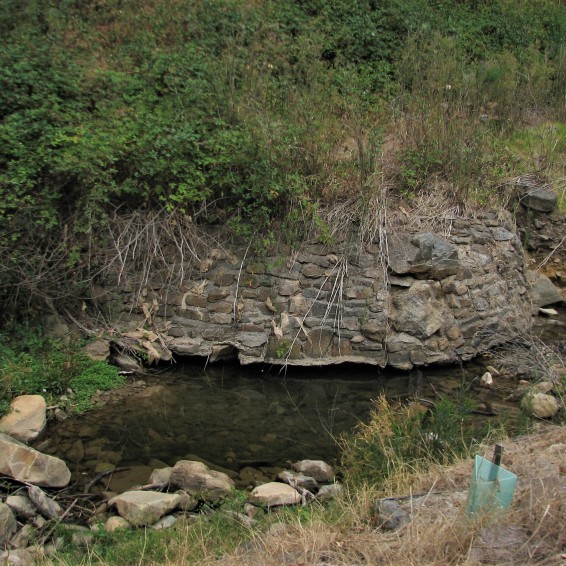 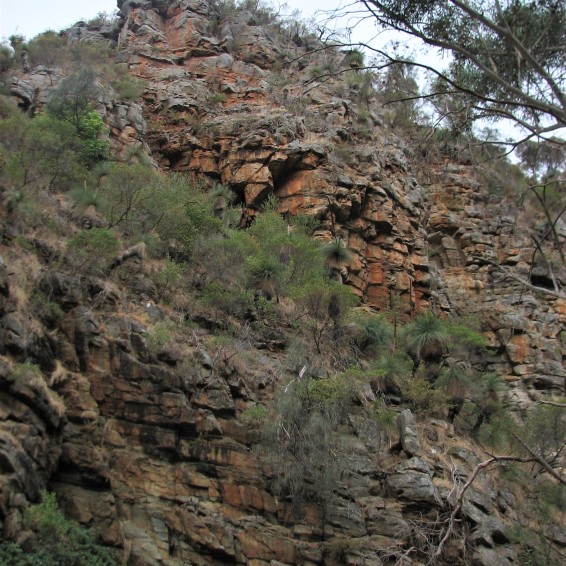 At last! We were facing the first falls. Or trickle.

We’ll have to see it in Winter and compare the flow, but the sight was majestic, nonetheless. We made our way back to the car, but this time being a little more aware of nature. The park is quite well-known for sightings of wildlife and today was no exception. 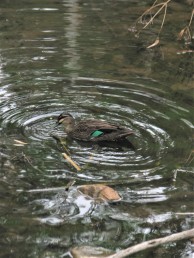 If you’ve heard about ‘drop bear’, this is a close up of the culprit.

Apparently there were roos (kangaroos) but we didn’t see them. The entire walk took us 2 hours, with all of our stops and photos. A couple of Richmond FC players ran past at some stage and they definitely wouldn’t have taken that long. It was an overcast day and only about 23C but the demands of the first stretch did make us thirsty. So be prepared.

Morialta Falls is part of Morialta Conservation Park. You can download the maps for free on your smart phone and know exactly where you are (I discovered later). Morialta was the name given to the park in 1972. Prior to that it was a National Pleasure Resort in 1915, after being donated to the Government by James Reid Smith in 1912. He had purchased it in 1901, but in 1870 Angora goats were introduced to the area, following attempts at mining and grazing. It has an interesting history. The original owners are not named, but I think they would be the Kaurna People. Park management still works with Aboriginal people in the development and maintenance of the area.

For the driest State in the driest Continent, I think we’re doing very well to have waterfalls!

Why! I might just see the one near Victor Harbour and make it a ‘Waterfalls in South Australia’ series.

Safe Travels. Visit South Australia and bring water and a hat. Watch out for drop bears.