Walk or run, it doesn’t matter. There are forums dedicated to people comparing their PBs and quoting both uphill and downhill times. Beginning at the carpark, situated at the base of the pretty, 18m first Waterfall, the medium difficulty track is quite steep in some parts and, with renovations going on at the moment, sometimes slippery with gravel. I had heard so much about this challenge and family members and work colleagues set themselves the task, so I decided to find out what it was all about.

From the carpark you can see the first falls in one direction and in the other, Utopia restaurant, described on http://waterfallgully.com.au/   as “…a beautifully preserved, century-old stone chalet which boasts the unique title of Australia’s last remaining heritage ‘tea room’, and the nation’s only restaurant set beside a natural waterfall.”

It doesn’t open on a Monday, so I cannot give an account of the interior or menu from a first hand point of view. But it is certainly picturesque, as are the old pathways and buildings that I remembered from over 50 years ago.

Let’s hit the trail! It is incredibly steep at first, mostly stone steps, and I wondered what I had set myself. However, that only lasts about 50 m so push on. The lookout is worth a quick stop (unless you are going for your PB). 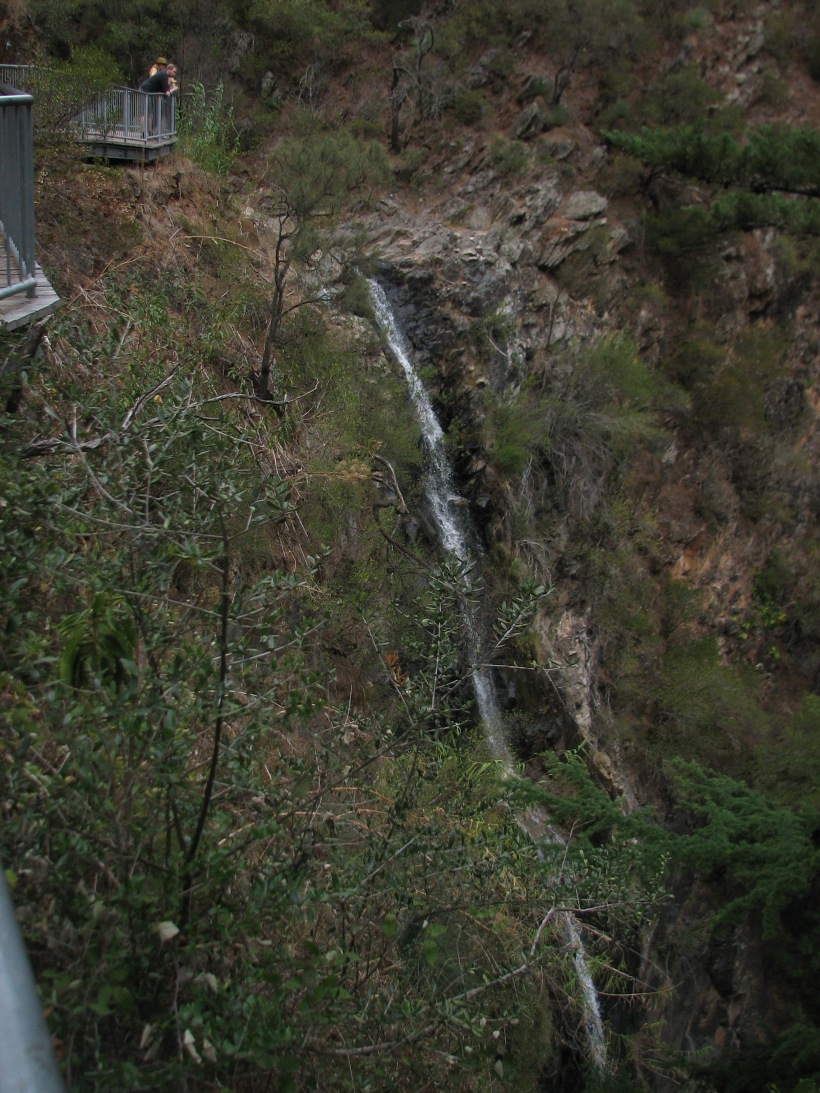 The second waterfall is 600m from the lookout over the first. There is a setting where you can stop and admire the scenery before pressing on towards the mark, which is Mount Lofty Summit.

At this stage I considered the time and the unknown length of the rest of the walk. I confess, I headed back to the carpark. However, I have every intention of making it to Mount Lofty (highest mountain in Adelaide region – 710km above sea level?) and seeing the panoramic views of Adelaide. The Mount Lofty Summit restaurant and cafe is well-regarded and boasts amazing views – I’ve seen them. I just can’t take good photos of it!

Head for Cleland Conservation Park, 10 km from the centre of Adelaide. The falls are best in Winter and Spring when they flow fuller, but even in Summer, or at the end, as you can see, there is water flowing. If you make it to the top and then down again and have some energy left, why not visit Cleland Wildlife park, where for a fee you can be up close or interact with kangaroos, koalas and other native Australian animals.

There are seven waterfalls in Cleland Conservation Park, apparently, the largest being in Waterfall Gully. The Gully was declared the State’s first National Pleasure Resort in 1912, some 30 years after it was established as a popular recreation and picnicking spot.

Safe Travels. Rest when you need to. Take a hat and water.